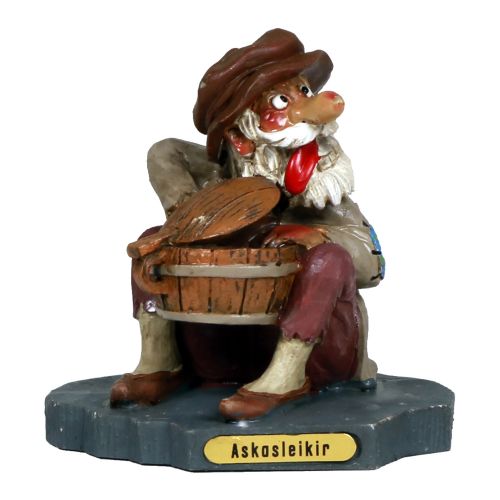 SKU
M-600
Add to Compare
As low as $32.00
In stock
Old Icelandic tales are told of 13 men who lived high up in the mountains with their mother, Gryla, and father, Leppaludi, and let’s not forget their infamous black cat.
Details
These 13 men are the Icelandic Yule Lads. 13 days before Christmas, they would come down from the mountains and into the towns, one a night and always in the same order. The Yule Lads would sneak around, often searching for food and scaring people. After their naughty escapades, they would then return to their home in the mountains; the last one would leave on the Thirteenth Night after Christmas on 6th January.

STEKKJASTAUR Stekkjastaur was the first. He would sneak into the sheep barns and try to suck milk from the ewes.

GILJAGAUR Giljagaur came second. He would creep into the barns where the cows were sleeping and eat the froth from the top of the milk barrels.

STUFUR Stúfur came third. The shortest and fattest of them all. He would steal the pans from the kitchen and eat all the leftover food he could find.

THVORUSLEIKIR The fourth was Thvorusleikir. He would grab wooden spoons with both hands and lick the food off them.

POTTASKEFILL Pottaskefill came fifth. He snuck into kitchens and scraped the leftovers out of the pots.

ASKASLEIKIR Askasleikir came sixth and would steal leftovers from people’s bowls that were lying around.

HURDASKELLIR Hurdaskellir came seventh. He would slam the doors shut so hard that people were not able to sleep properly during the night.

SKYRGAMUR Skyrgamur came eighth. He broke the locks off skyr barrels in pantries and devoured all of the skyr.

BJUGNAKRAEKIR Bjugnakraekir came ninth. He would snatch the hanging sausages that were being smoked.

GLUGGAGAEGIR Gluggagaegir came tenth and would peek through the windows of people’s homes to see if he could find anything worth stealing.

GATTATHEFUR Gattathefur came eleventh. This Yule Lad had a humongous nose and could smell the traditional Christmas flatbread from way up in the mountains.

KETKROKUR The twelfth Yule Lad was Ketkrokur. He would snatch chunks of meat from pantries with his long hook.

KERTASNIKIR Last but not least came Kertasnikir. On Christmas Eve, he would chase the children who walked around the towns and steal their candles (which in those days were edible).

JOLAKOTTURINN The Yule Cat was abnormally large and had fearsome glowing eyes. He was grim and ugly and hissed, scratched and blew. Everyone was afraid of the Yule Cat, for he hunted men and did not care for tiny mice. He hunted people down who did not receive any new clothes for Christmas and ate all of their Christmas dinner and even the people themselves if he could. This is why everybody tried to give their children new clothes before Christmas, because the Yule Cat was not allowed to eat anybody who received new clothing.

GRYLA Gryla, mother of the Yule Lads lived in a cave up in the mountains and was sometimes skinny, sometimes fat. If children were nice and well behaved, Gryla would go hungry, but if the children were naughty or bad, this would make Gryla very happy and she would fetch them from the towns and take them all the way up into her cave. Then she would put her big cauldron over an open fire and stuff the children in. What happened next still remains a mystery, but Gryla would instantly become full and fat. One Christmas, every child got nice new clothes and all the children were so happy and nice. This shocked Gryla and she got very scared and didn’t have anything to eat for 14 days, so she laid down in bed and died.

LEPPALUDI Leppaludi was a troll who lived in a cave with his wife, Gryla, and their sons, the 13 Yule Lads. Leppaludi was both bad and ugly. When all the children had become so well behaved and good and Gryla had died from starvation because the troll couple had nothing to eat, he mournfully sat by her side on the bed until he too, died. The lesson to learn from this story is that all children should be good and do as their parents say, so that the scary troll couple don’t ever come back to life.